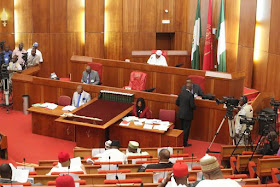 Barring any last minute changes, the Senate will on March
17th pass the 2016 budget into law. This was announced by
the Senate Committee Chairman on Appropriation, Senator
Danjuma Goje and his House of Representatives
counterpart, Hon. Jibrin Abdulmumim at a joint press
briefing yesterday March 2nd.


They said the National Assembly is on course to ensure
that all the areas of controversies grey areas in the budget
proposal is resolved.

“We are going to engage the executive, we are part
of the same government. We may not be 100
percent right but the main thing is to ensure that we
produce a budget that would translate to the
betterment of the lives of Nigerian. We are working
round the clock, even during the weekends to ensure
that we complete the work” Goje said
On his part, Abdulmumim said the budget will be laid on the
floor of the Senate and the House on March 16th and then
passed into law

“After all consultation with the leadership of the
House and Senate we can confirm to you that all
things being equal, we should be able to lay our
report of the 2016 Appropriation bill before the
House and the Senate on the 16th of March and the
consideration, hopefully should be done on the 17th.